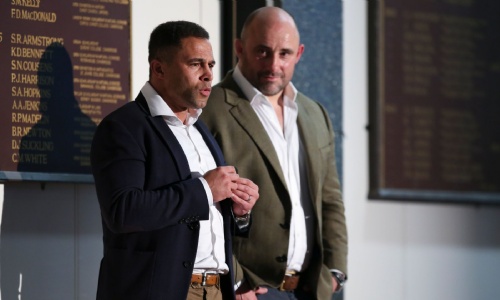 A capacity crowd of almost 400 guests,  comprising parents, friends and old boys packed the Queen's Hall on Thursday 4 April for the Annual Friends of Rugby Sportsman’s Dinner, an event which raises much needed funds for the rugby played at RGS.

This year, former England International in both rugby union and league, Jason Robinson OBE, was our guest speaker and we were also delighted to welcome David Flatman, aka Flats, former England international and celebrated pundit as Master of Ceremonies.The evening included the presentation of 1st XV Captain's Cap to Henry Chilcott.

Thanks goes to our Headmaster Phil Wayne who rightly paid tribute to the immense amount of time and hard work put in by the sports staff which yields outstanding sporting results for the students and to Friends of Rugby for their fundraising efforts and, importantly, to the parents, whose support on the touchlines was warmly acknowledged.

Particular thanks was given to Richard Morris who steps down as Chair of Friends of Rugby after 4 years in the role.

Proceeds from the ticket sales,  takings on the night and auction bids raised in excess of £40,000 which goes to the every day costs of running the rugby programme at  RGS.

The FRORGS Team, Vik Kapoor, Fran and Sarah Kucera, would like to thank everyone who came, to all our auction prize bidders and donors, and to all who made the event a success, with a special thanks to our sponsors: Century 21 Estate Agents and Raydens Solicitors.

Please enter some content for your news story here.